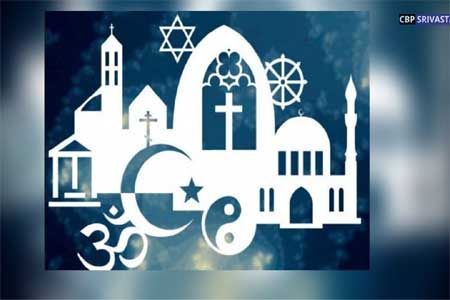 Religious persecution, religious bigotry, dehumanization of a particular religious group, blasphemy, hate speech and so on, all have emerged as major concerns for a country to remain tolerant, rational, secular and ultimately modern. Is being religious anti-secular? Or, is being secular anti-religious? We need to delve into this, especially in a multi-cultural, multi-lingual, multi-religious, multi-ethnic and multi-national nation, that is, India. Pluralism is one of the striking features of India’s society, and tolerance is the pith of its cultural system. Hence, secularism remains an obvious outcome. This also signifies India’s liberal attitude making democracy a deep-rooted philosophy. That’s why we rightly say that democracy in India is not only a political order, it is our way of life.

‘Secularism’ what George Holyoake (1851) says is a concept of creating a socio-cultural order where religion and politics should be separated without criticizing any of the prevalent religious beliefs. Holyoake coined this term considering the situation in the West when the Church had largely influenced the state and had also interfered into its working. Complete separation of religion and state was also conceived by Barry Kosmin of the US-based Institute for the Study of Secularism in Society and Culture (ISSSC) which he called ‘Hard Secularism’, though he also explained its other form, ‘Soft Secularism’ based on religious tolerance. However, it is not possible to completely separate religion and politics in absolute terms for preventing the emergence of communal tendencies and other anti-secular concerns. This could be exemplified with a decision by the US Federal Court in which the ‘Lemon Test’ was explained.[1] The Court held that complete separation of religion and state was not possible. To identify this the Lemon Test could be done which comprised:

Considering this reality and also the intricate demands of India’s socio-cultural order, the Constitution of India adopted the principle of equal respect to all religions. In other words, secularism in India is founded on religious tolerance, what Kosmin says ‘soft secularism’. Thus, the essence of secularism in India is non-discrimination of people by the state on the basis of religious differences.[2] It is also held by India’s Supreme Court that secularism in India is not the negation of state religion, rather, it is a positive right of a citizen/person to profess, practice or propagate religion of his/her choice. This has been the reasonably secularism is included in the Basic Structure of the Constitution.[3]

As said earlier, secularism in India is founded on the principle of religious tolerance which is enshrined in the Rights to Religious Freedom from Articles 25 to 28 of the Constitution. Hence, it is evident that though the word ‘secular’ was inserted in the Preamble by the Constitution (42nd Amendment) Act, 1976, India was a secular state from the commencement of the Constitution itself. However, Indian society has remained secular since the time immemorial. From the historical perspective, the ethical and moral principles on which secularism largely depends, were rooted in India’s diverse society during the reign of the great King Ashoka whose policy of ‘Dhamma’, despite being a debatable issue among the historians, at least had tried to bring in tolerance in the religious groups at large.

Similarly, when we look at Akbar’s ‘Din-i-Ilahi’ (Religion of God), it is clear that it was considered a component of syncretism, which is an inclusive approach to religion and combines number of religious beliefs and faiths.

Thus, secular ideas were certainly assimilated into the policies of the rulers from the ancient period itself. Clause (2) of Article 25, in the present Constitution, provides that the state shall regulate or restrict any economic, financial, political or other secular activity which may be associated with religious practice. Moreover, under Article 25(1) the Right to Religious Freedom may be reasonably restricted on the grounds of public order, morality and health. These rights are also subject to other Fundamental Rights incorporated in Part III of the Constitution. All such facts make it evident that in the context of secularism, the state is neither pro, nor against, nor neutral to religion. In fact, it believes in dynamic neutrality which means that the state, while preserving the sanctity of the essence of secularism shall not interfere into day-to-day religious activities, but shall make law or take steps for preventing the emergence and spread of communal tendencies and other anti-secular issues and concerns in general, and blasphemy and hate speech in particular. Therefore, it is very true that secularism is incorporated in the Constitution of India not as an anti-religion concept, rather it is one of the components and principles of India’s policy design.

Articles 25-28 incorporate the Rights to Religious Freedom. However, the term ‘religion’ has not been defined in the Constitution. The Supreme Court while defining it says that ‘religion’ is certainly a matter of faith with individuals and communities and not necessarily theistic.[4] Religious doctrines, according to the Supreme Court also contribute to a person’s spiritual well-being.[5] When we consider religion in the context of secularism, it may be said that faith and belief are different. Faith, in fact, is the zenith of belief. Hence, a person may have faith in one religion and belief in others at the same time. Similarly, religion and philosophy are also different concepts and the philosophy of all regions in the world is the same which is global peace. This attitude makes a person truly secular.

So far as the extent of secularism in India is concerned, it spreads across various sectors beyond religion such as social, linguistic etc. It is important to note here that in Article 30, minorities have been given the right to establish and administer educational institution of their choice. It is a fact that minorities in any country primarily face the problem of insecurity in almost all spheres including education due to the apprehension of any arbitrary or discriminatory behaviour. The provision under Article 30 thus provides security in the context of education through equality and ensures the inclusion of such communities into the socio-cultural mainstream.

More importantly, Part XVII (Articles 343-351) deal with linguistic affairs. The 8th Schedule of the Constitution also incorporates languages. As India does not have a national language, we may say that it is linguistically secular too.

Issues and concerns like casteism, communalism, blasphemy, hate speech etc. pose serious threats to India’s secular milieu. However, in this article blasphemy and hate speech have been given focus as anti-secular concerns.

In general terms, blasphemy is an act of expressing contempt or lack of reverence for God or sacred things. Black’s Law Dictionary defines it as ‘irreverence toward God, religion, a religious icon, or something else considered sacred.’ To prevent such acts the US-based organization the Centre for Enquiry advocates hard secularism, that is, state religion separatism. However, as said earlier, complete separation is not possible. Therefore, it is required that both at domestic and international levels the freedom of expression and freedom of religion must be balanced. Being secular does not mean that someone’s freedom of expression should be restricted even if he has dissented to constructively from some doctrinal principles of a particular religion. This approach brings his right to freedom of expression and also the freedom of conscience into conflict. In this context, the European Commission for Democracy through Law, also called the Venice Commission [6]says that the offence of blasphemy should be abolished. Similarly, the International Covenant on Civil and Political Rights (ICCPR), 1966 says that ‘since any restriction on freedom of expression constitutes a serious curtailment of human rights, it is not compatible with the Covenant for a restriction to be enshrined in traditional, religious or other such customary law.’ The Freedom of Thought Report, 2019, published by Humanists International[7] says that altogether 69 countries have blasphemy laws, of which six countries have blasphemy is punishable by death. Some countries also have apostasy laws[8] and in 12 of them it is punishable by law. Very recently, the French President Emmanuel Macron has said that freedom in France includes freedom to believe or not to believe, but this is inseparable from the freedom of expression up to the right to blasphemy. To be French is to defend the right to make people laugh, to criticize, to mock, to caricature etc. On this ground, the French President has proposed a law against ‘Islamic Separatism’ while defending the satirical newspaper Charlie Hebdo. Strictly speaking, there is no right to blasphemy in France under Article 10 and 11 of the Declaration of the Rights of Man and the Citizens, 1789. However, French laws allow free criticism of religions.[9]

So far as India is concerned, it does not practice blasphemy laws but has certain provisions related to hate speech. The Constitution of India provides for freedom of speech and expression in Article 19(1)(a), but it is not absolute. One of its foundational principles is the concept of positive liberty as expressed by John Stuart Mill, according to which there shall be reasonably restricted liberty so that liberty of all persons is protected. This is the reason why from Articles 19(2)-19(6) grounds for restricting the fundamental freedoms, such as sovereignty and integrity, security of the state, defamation, public order, etc. have been given to make the liberty positive. Restricted or positive liberty is an essential factor to strike a balance between the individual and social interests. Similarly, in order to strike a balance between the Right to Freedom of Expression and the Right to Religious Freedom, certain sections of the Indian Penal Code 1860 assume significance, which are related to what we call hate speech, though this term is not expressly mentioned.

Section 295-A[10] of the Indian Penal Code (IPC), 1860 provides for imprisonment up to three years with/without fine for outraging the religious feelings of any class of citizens of India. Similarly, Section 153-A also prohibits promotion of enmity between different groups on grounds of religion, race, place of birth, residence, language etc. and doing acts prejudicial to maintenance of harmony. These two provisions in the IPC make it crystal clear that the Code intends to restrict freedom of expression for the purpose of strengthening the principle of religious tolerance to maintain and sustain communal harmony for social cohesion.

A plural society like India needs to protect democratic values of equality, liberty, fraternity and justice in all forms social, economic and political. The Indian society has been largely a religious society which has probably contributed to provide a fertile ground for communal groups to spread their wings threatening the core of the system, that is tolerance. In this backdrop, it is essential for the state to devise a three-pronged strategy to address the anti-secular concerns. Firstly, the principle of no-discrimination must be protected so that accessibility of the excluded and partially-excluded classes of citizens to all resources. Secondly, religions in India should be rationalized for which making a Uniform Civil Code at the earliest is inevitable. Finally, issues like casteism and socio-economic conflicts mainly due to widespread disparities must be addressed through effective implementation of developmental programmes and schemes.

Conclusively, protection of India’s secular character will not only protect its liberal democracy, it will also sensitize the socio-cultural order. That’s why, it is said that the process of secularization will transform a religious and conservative social order into a liberal, rational, tolerant and definitely modern order which will strengthen a new growth trajectory for India.

[6] Venice Commission is the advisory body on constitutional matters of the Council of Europe.

[7] Founded in 1952 at Amsterdam, it is an international NGO promoting secularism, human rights and equality.

[8] Apostasy is a formal renunciation of a religion by a person.

[9] These are inspired from the Plevan Laws on Racism, passed in 1972.