Supreme Court Bench headed by Chief Justice of India S A Bobde observed that it is trying to discourage individuals from filing petitions under Article 32 of the Constitution. 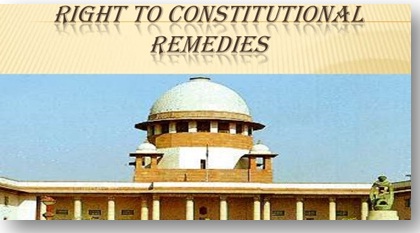 The Supreme Court and particularly the incumbent Chief Justice of India came under fierce attack for a comment made during court proceedings about the scope of Article 32 of the Indian Constitution. The CJI while holding court had commented that, we are trying to limit Article 32 petitions.

It is one of the fundamental rights listed in the Constitution that each citizen is entitled. Article 32 deals with the Right to Constitutional Remedies, or affirms the right to move the Supreme Court by appropriate proceedings for the enforcement of the rights conferred in Part III of the Constitution.

It states that the Supreme Court “shall have power to issue directions or orders or writs, including writs in the nature of habeas corpus, mandamus, prohibition, quo warranto and certiorari, whichever may be appropriate, for the enforcement of any of the rights conferred by this Part. The right guaranteed by this Article “shall not be suspended except as otherwise provided for by this Constitution”.

Fundamental rights are the rights that grant individuals equality in every aspect irrespective of race, colour, caste, religion, birthplace, or gender. These rights are mentioned under Articles 12 to 35 of the Indian Constitution. There are pre-defined punishments in case of violation of these rights upon the discretion of the judiciary.

The purpose of Article 32 is to provide a guaranteed, effective, expeditious, inexpensive and summary remedy for the protection of the fundamental rights.

In case of the enforcement of Fundamental Rights, the jurisdiction of the Supreme Court is original but not exclusive. It is concurrent with the jurisdiction of the high court under Article 226. It vests original powers in the high court to issue directions, orders and writs of all kinds for the enforcement of the Fundamental Rights.

Further, the Parliament (under Article 32) can empower any other court to issue writs.

However, the Supreme Court has ruled that where relief through high court is available under Article 226, the aggrieved party should first move the high court.

These writs are borrowed from English law where they are known as ‘prerogative writs’. They are so called in England as they were issued in the exercise of the prerogative of the King who was, and is still, described as the ‘fountain of justice’.

In the Constituent Assembly debates in December 1948, a discussion on this fundamental right (in the draft, it is referred to as Article 25), Dr B R Ambedkar had said, “If I was asked to name any particular Article in this Constitution as the most important — an Article without which this Constitution would be a nullity — I could not refer to any other Article except this one. It is the very soul of the Constitution and the very heart of it.

He said the rights invested with the Supreme Court through this Article could not be taken away unless the Constitution itself is amended and hence it was “one of the greatest safeguards that can be provided for the safety and security of the individual.

Others in the drafting committee also said that since it gives a person the right to approach the Supreme Court as a remedy if fundamental rights are violated, “it is a right fundamental to all the fundamental rights” guaranteed under theConstitution.

The Constituent Assembly debated whether fundamental rights including this one could be suspended or limited during an Emergency. The Article cannot besuspended except during the period of Emergency.

Recent Observations of the Supreme Court on Article 32

In the case of the journalist Siddique Kappan, the court asked why the petitioners could not go to the High Court. It has sought responses from the Centre and the UP government, and will hear the case later this week.

In another case last week invoking Article 32, filed by a Nagpur-based man arrested in three cases for alleged defamatory content against the Chief Minister of Maharashtra and others, the same Bench directed him to approach the High Court first.

Relief under Article 32 was also sought in a petition filed by Telugu poet’s wife, against the conditions of his detention in jail since 2018. The Supreme Court directed the Bombay High Court to expedite the hearing on abail plea filed on medical grounds, pending since September. It observed that once a competent court had taken cognizance, it was under the authority of that court to decide on the matter.

In another matter, the Bench had issued a contempt notice to the Assistant Secretary of the Maharashtra Assembly who, in a letter to Republic TV editor-in-chief had questioned him for approaching the top court against the breach-of-privilege notice.

The court had then said that the right to approach the Supreme Court under Article 32 is itself a fundamental right and that “there is no doubt that if a citizen of India is deterred in any case from approaching this Court in exercise of his right under Article 32 of the Constitution of India, it would amount to a serious and direct interference in the administration of justice in the country”.

In Romesh Thappar vs State of Madras (1950), the Supreme Court observed that Article 32 provides a guaranteed remedy for the enforcement of fundamental rights. The Court is thus constituted the protector and guarantor of fundamental rights, and it cannot, consistently with the responsibility so laid upon it, refuse to entertain applications seeking protection against infringements of such rights.

During the Emergency, in Additional District Magistrate, Jabalpur vs S S Shukla(1976), the Supreme Court had said that the citizen loses his right to approach the court under Article 32.

Constitutional experts say that it is eventually at the discretion of the Supreme Court and each individual judge to decide whether an intervention is warranted in a case, which could also be heard by the High Court first.

Question for Prelims : Which of the following writ can be issued against both private individuals and public authorities ?

Question for Mains : ‘Judiciary has played highly proactive role to safeguard the fundamental rights’. In the light of the statement, evaluate the role played by the judicial activism in achieving ideals of democracy.