‘Cut-Paste’ inside a Genetic Sequence

Its simplicity has often been compared to the ‘Cut-Copy-Paste’ mechanism in any word processor (or probably, the equally common ‘Find-Replace’ mechanism), while its uses can potentially transform human beings, and all other life forms. It can potentially eliminate genetic, and other, diseases, multiply agricultural production, correct deformities, and even open up the more contentious possibilities of producing ‘designer babies’, and bringing cosmetic perfection. In effect, anything that is linked with functioning of the genes can be corrected, or ‘edited’. 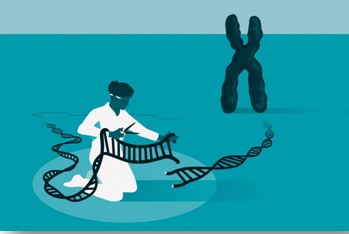 The CRISPR (short for the rather inelegantly named Clustered Regularly Interspaced Short Palindromic Repeats) technology for gene-editing has been triggering tremendous excitement ever since it was developed in the year 2012, both for the promise that it holds in improving the quality of life, and the dangers of its misuse. Hundreds of scientists and laboratories have since started working on the technology for a variety of uses. In the last eight years, the technology has brought a string of awards and honours for its developers. On Wednesday, it culminated in the Nobel Prize for Chemistry for the two women who started it all, 52- year-old Emmanuelle Charpentier of France, and 56-year-old American Jennifer Doudna.

It is possibly the only time in the history of Nobel Prize that two women have been declared the sole winners.

Editing, or modifying, gene sequences is nothing new. It has been happening for several decades now, particularly in the field of agriculture, where several crops have been genetically modified to provide particular traits.

“But what CRISPR has done is make gene editing very easy and simple, and at the same time extremely efficient. And the possibilities are nearly endless,” said Debojyoti Chakraborty who works with this technology at the New Delhi-based CSIR-Institute of Genomics and Integrative Biology.

In essence, the technology works in a simple way — it locates the specific area in the genetic sequence which has been diagnosed to be the cause of the problem, cuts it out, and replaces it with a new and correct sequence that no longer causes the problem.

The technology replicates a natural defence mechanism in some bacteria that uses a similar method to protect itself from virus attacks.

An RNA molecule is programmed to locate the particular problematic sequence on the DNA strand, and a special protein called Cas9, which now is often described in popular literature as ‘genetic scissor’, is used to break and remove the problematic sequence. A DNA strand, when broken, has a natural tendency to repair itself. But the auto-repair mechanism can lead to the re-growth of a problematic sequence. Scientists intervene during this auto-repair process by supplying the desired sequence of genetic codes, which replaces the original sequence. It is like cutting a portion of a long zipper somewhere in between, and replacing that portion with a fresh segment.

Because the entire process is programmable, it has a remarkable efficiency, and has already brought almost miraculous results. There are a whole lot of diseases and disorders, including some forms of cancer, that are caused by an undesired genetic mutation. These can all be fixed with this technology. There are vast applications elsewhere as well. Genetic sequences of disease-causing organisms can be altered to make them ineffective. Genes of plants can be edited to make them withstand pests, or improve their tolerance to drought or temperature.

“In terms of its implications, this is possibly the most significant discovery in life sciences after the discovery of the double-helix structure of the DNA molecule in the 1950s,” said Siddharth Tiwari of the Mohali-based National Agri-Food Biotechnology Institute who has been using the CRISPR technology on genes of banana plant.

Charpentier and Doudna were working independently when they stumbled upon different pieces of information that later came together to be developed into this technology. Charpentier, a biologist then working at a laboratory in Sweden, needed the expertise of a biochemist to process the new information she had got on the genetic sequences in a particular bacteria she had been working on called Streptococcus pyogenes.

She had heard of Doudna’s work at the University of California, Berkeley, and the two happened to meet at a scientific conference in Puerto Rico in 2011, according to an account published on the website of the Nobel Prize. Chapentier proposed a collaboration, to which Doudna agreed. Their research groups then collaborated over long distance

over the next year. Within a year they had been able to come out with a revolutionary technology of gene-editing.Several other scientists and research groups also made vital contributions in the development of this technology. Someone like VirginijusSiksnys, a biochemist working at the Vilnius University in Lithuania, is widely recognised as a co-inventor of this technology. In fact, Siksnys shared the 2018 Kavli Prize in Nanoscience with Doudna and Chapentier for this technology. But the seminal contribution of the two women is undisputed. Their achievement has been recognised through several prestigious awards in the last few years, including the Breakthrough Prize in Life Sciences in 2015 and the Wolf Prize in Medicine earlier this year.

There has been some murmurs in the scientific community about the Chemistry Nobel having gone to biologists. But apparently this is not a new phenomenon. The central role of chemistry in life sciences — at the molecular level, biology is essentially chemistry — has ensured that increasing number of Nobel prizes have recently been awarded for work in the field of biochemistry. In fact, a research paper published earlier this year has pointed out this gradual shift in the nature of Chemistry prize. According to Chemistry World, a news magazine published by the Royal Society of Chemistry, of the 189 scientists awarded with the Chemistry Nobel so far, 59 had worked in the field of biochemistry. This was more than any other branch of chemistry.

In November 2018, a Chinese researcher in Shenzen created international sensation with his claim that he had altered the genes of a human embryo that eventually resulted in the birth of twin baby girls. This was the first documented case of a ‘designer babies’ being produced using the new gene-editing tools like CRISPR, and raised exactly the kind of ethical concerns that scientists like Doudna have been speaking about.

In the case of the Chinese twins, the genes were edited to ensure that they do not get infected with HIV, the virus that causes AIDS. This special trait would then be inherited by their subsequent generations as well. The concerns were not over the reason for which the technology was used as much as the ethics of producing babies with particular genetic traits. Scientists pointed out that the problem in this case, potential infection to HIV virus, already had other alternative solutions and treatments. What made matters worse was that the gene-editing was probably done without any regulatory permission or oversight. Others also pointed out that while CRISPR technology was incredibly precise, it wasn’t 100 per cent accurate, and it is possible that some other genes could also get altered by mistake.

Doudna herself has been campaigning for the development of internationally rules and guidelines for the use of CRISPR technology, and has advocated a general pause these kind of applications till such time.

PreQ: Nobel committee’s decision not to include the following pair of scientists in the list of winners for Chemistry aroused sensation in various quarters. Identify the correct pair.

MainsQ: What is CRISPR technology ? How can it be used to produce “designer babies” ? What are its ethical concerns ? Why is it called the “Cut-Copy-Paste” technology ?