Issues with the Bt Cotton

Bt Cotton is no longer a profitable way for Farmers.

Various studies highlighted the declining benefit of Bt cotton to the farmers. The contribution of Bt cotton to yield increase was only about 4% each year, still, since yields vary annually by over 10%, the benefits claimed were dubious. Research committee examines data over 20 years, studying each State separately and correcting for illegal Bt cotton planting.

There are discrepancies between yield and the deployment of Bt cotton. For instance, the Bt acreage was only 3.4% of the total cotton area in 2003, not sufficient to credit it for the 61% increase in yield in 2003-2004. Furthermore, with only 15.7% Bt cotton coverage by 2005, yield increases were over 90% over 2002 levels. While Bt cotton adoption corresponded to a drop in spraying for bollworms, the study says that the countrywide yields stagnated after 2007 even as more farmers began to grow Bt. By 2018, yields were lower than in the years of rapid Bt adoption.

What is Bt Cotton ?

Bt cotton has been genetically modified by the insertion of one or more genes from a common soil bacterium, Bacillus thuringiensis. These genes encode for the production of insecticidal proteins, and thus, genetically transformed plants produce one or more
toxins as they grow. The genes that have been inserted into cotton produce toxins that are limited in activity almost exclusively to caterpillar pests (Lepidoptera). However, other strains of Bacillus thuringiensis have genes that encode for toxins with insecticidal activity on some beetles (Coleoptera) and flies (Diptera). Some of these genes are being used to control pests in other crops, such as corn.

What insects does it control?

In 1996, Bollgard cotton (a trademark of Monsanto) was the first Bt cotton to be marketed in the United States. The original Bollgard cotton produces a toxin called Cry 1Ac that has excellent activity on tobacco budworm and pink bollworm. These two insects are extremely important caterpillar pests of cotton, and both are difficult and expensive to control with traditional insecticides. Consequently, Bt cotton was widely adopted by growers in the western Cotton Belt for pink bollworm and by growers in the Midsouth and Southeast, primarily for tobacco budworm. Bollgard toxin also has moderate activity on bollworm and to a lesser extent on loopers, fall armyworm and beet
armyworm. 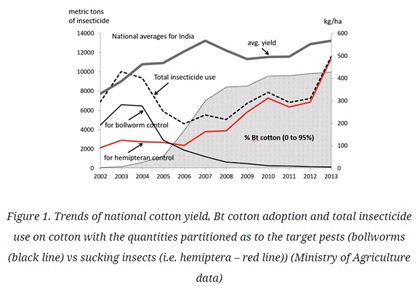 The GMO Bt Cotton was introduced in 2002, and the hybrid seeds were considerably more expensive. The plants also require more fertilizer and stable water, and prevents seed saving and replanting. Thus it serves as a value capture mechanism requiring annual purchases of seed. Even the meager increases in yield which resulted were associated with increased fertilizer use.

While the Bt technology initially solved the bollworm problems, outbreaks of secondary pests not controlled by the Bt toxins began to occur, again increasing insecticide use in Bt cotton. By 2013 pre-2002 levels were surpassed. This caused ecological disruption and induced outbreaks of still newer secondary pests (whitefly, jassids, mealybug), and increased levels of resistance to insecticides. By 2013, Indian farmers were solidly on both the insecticide and biotechnology treadmills. And yet, some technologists still propose that developing pest issues could be fixed with still further biotech fixes.

Bt cotton did not increase yields, but did contribute to increased cost of production, all in the face of stagnant yields leading to economic distress. 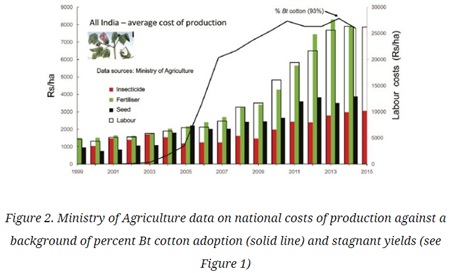 Analysis of the available statewide and national data shows that suicides among Indian cotton farmers increase with decreasing yield and net revenues.

Resistance to Bt cotton in pink bollworm is now widespread in India, and resistance to insecticide in many pests is increasing.

If we consider the statewise date, reflects the clear picture such as in Maharashtra, yields climbed in the decade after 2000, with no change in the rate of increase when Bt cotton was introduced. In Gujarat, Andhra Pradesh and Madhya Pradesh as well, there is no correlation between the adoption of the variety and increase in yields. For instance, Gujarat’s surge in cotton yields was 138% in 2003, even as Bt cotton was used only for 5% of land under cotton. Similar findings are seen in Punjab, Haryana and Rajasthan, where yield increase is incongruous with the spread of Bt cotton.

The rise in cotton yields can be explained by improvements in irrigation, for instance in Gujarat, and a dramatic growth across the country in the use of fertilizers. Gross fertilizer use for cotton more than doubled from 2007-2013; the average rose from 98 kg/ha in 2003 to 224 kg/ha in 2013.

There is a strong correlation between the rise in use of fertilizers in individual States and yields, and this bias increases when it is combined with improvements in irrigation.

The total insecticide expenditure per hectare reduced in 2006, and Lepidopteran spraying expenditures continued to fall until 2011. While the ABW that feeds on different plants does not appear to have developed a resistance to Bt, the PBW developed a resistance by 2009 in India. In a few years, the situation was dreadful. Bollworm spraying began to climb again. Sap-sucking insects have surged for the hybrids, as the hirsutum Bt cotton hybrids are quite vulnerable. With rising acreage under Bt cotton cultivation, expenditures for spraying for sucking pests also went up. By 2018, farmers were spending an average of $23.58 per hectare on insecticide — 37% more than the pre-Bt levels.

Researchers suggested from the National Seed Association of India is for the government to encourage a move back to Bollgard, the first iteration of Bt cotton, as Monsanto hasn’t patented BG in India. Both BG, which has a single bacterial gene called CryA1C, and BG-2, which has CryA1C and Cry2AB2, are designed to protect against pink bollworm. BG began failing against the pest in 2009, while BG-2 began failing in 2014.

Interestingly, none of the other 14 Bt cotton-growing countries have seen this resistance. China still successfully controls pink bollworm with first-generation Bt cotton. The U.S. and Australia are moving on to third-generation BG-3 without having faced this problem.

Research also suggests that with pure-line cotton varieties, high density planting, and short season plants, cotton yields in India can be good and stand a better chance at withstanding the vagaries of climate change. But government backing for resources, infrastructure and seeds is essential to scale up ‘desi’ varieties. It is time to pay attention to science and acknowledge that Bt cotton has failed in India, and not enter into further misadventures with other Bt crops such as brinjal or herbicide resistance.

In relation to the Genetic Engineering Appraisal Committee, consider the following statements:

1. It functions under the Ministry of Fertilizers.
2. It is the final deciding authority for approval of genetic seeds.

Why is India the only Bt cotton-growing country facing the problem of pink bollworm infestation? Examine the issue.