Recently released annual report of RBI stated that the Bank frauds more than double in FY20 to ₹1.85 trillion. 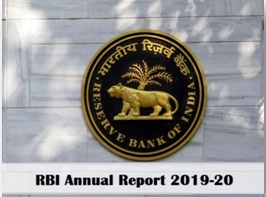 Bank frauds jumped more than twofold in the previous fiscal on delayed detection even as the Reserve Bank of India mandated implementation of early warning signals by lenders. Bank frauds worth more than Rs 1.85 lakh crore were reported in the year ended June 2020 compared with over Rs 71,500 crore in the previous fiscal, according to the RBI’s annual report for 2019-20.

Frauds have been predominantly occurring in the loan portfolio (advances category), both in terms of number and value. There was a concentration of large value frauds, with the top 50 credit-related frauds constituting 76% of the total amount reported as frauds during 2019-20, the annual report said. 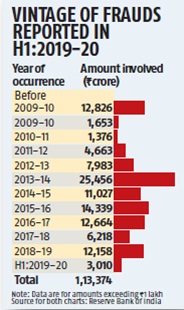 Frauds reported by banks of ₹100,000 and above have more than doubled in value to ₹1.85 trillion in FY20, with the number of such cases increasing 28% in the same period, the Reserve Bank of India’s annual report showed.

However, the date of occurrence of these frauds are spread over several previous years and are accounted for in the financial year when they are reported. Data from the central bank also showed that a majority of these frauds are in loan portfolios of banks, both in terms of number and value.

There was a concentration of large value frauds, with the top 50 credit-related frauds constituting 76% of the total amount reported as frauds during 2019-20. Incidents relating to other areas of banking, like off-balance sheet and forex transactions, fell in 2019-20, stated by RBI. Public sector banks accounted for 80% of the ₹1.85 trillion reported as frauds in FY20, followed by private sector banks at 18%. Frauds in loans constituted 98% of the total frauds or at ₹1.82 trillion, with other segments like off-balance sheet and cards or internet banking forming much smaller part of it.

Weak implementation of early warning signals (EWS) by banks, non-detection of EWS during internal audits, non-cooperation of borrowers during forensic audits, inconclusive audit reports and lack of decision making in joint lenders' meetings account for delay in detection of frauds, the report said .

According to RBI, the EWS mechanism is getting revamped alongside strengthening of the concurrent audit function, with timely and conclusive forensic audits of borrower accounts under scrutiny. In this regard, it had set up the advisory board for banking frauds (ABBF) in consultation with the central vigilance commission (CVC).

Once an account is declared fraud, banks need to set aside 100% of the outstanding loans as provisions, either in one go or over four quarters, according to RBI rules. The central bank has been trying to reduce the gap between the occurrence of a fraud and its reporting. The annual report said that while the frauds framework focuses on prevention, early detection and prompt reporting, the average lag in detection of frauds remains long.

Over the past decade, local banks have invested a few billion dollars in technology. There is no single source of its capture, though. Nor have these investments led to a noticeably early detection of frauds.

Further, the banks have embarked on a digital transformation journey towards getting a single view of the customer, the back-end integration of various customer data along with the operational data is still at a nascent stage.

A significant effort is spent in collating data and then analysing it for fraud risks, thereby making an early warning system somewhat under utilised.

With capital quoting at a premium, the system can ill-afford vast sums getting locked up in frauds (and provisioning for them) at the expense of shareholders and depositors. In the last meeting of the subcommittee of the Financial Stability and Development Council, chaired by RBI Governor Shaktikanta Das, discussed measures to strengthen the system against frauds and revisit the framework for early warning signals. The banking regulator can be expected to step up the pace on this front, and perhaps even increase the penalties on banks.

With reference to the Financial Stability and Development Council, consider the following statements:

Historic backlogs and weak internal control measures in banks have led to a doubling in frauds. Discuss.