Context: The RBI is open to look at proposal for setting up bad bank. 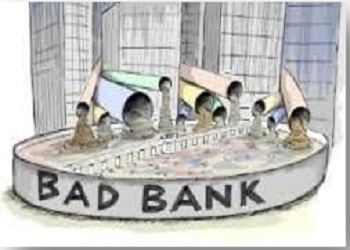 As bad bank has been under discussion for a very long time. The RBI has regulatory guidelines for Asset Reconstruction Companies (ARCs). RBI said the if any proposal (for setting up a bad bank) comes, we are open to examining it and issuing required regulatory guidelines.

The RBI Governor observed that the integrity and quality of governance are key to good health and robustness of banks and NBFCs.

But, the recent events in our rapidly evolving financial landscape have led to increasing scrutiny of the role of promoters, major shareholders and senior management vis-à-vis the role of the Board. The RBI is constantly focussed on strengthening the related regulations and deepening its supervision of financial entities. Some more measures on improving governance in banks and NBFCs are in the pipeline. As the problem of non-performing assets persists in a sector stressed by the pandemic, the RBI Governor has agreed to look at a proposal for creating a bad bank.

It conveys the impression that it will function as a bank but has bad assets to start with. Technically, a bad bank is an asset reconstruction company (ARC) or an asset management company that takes over the bad loans of commercial banks, manages them and finally recovers the money over a period of time. The bad bank is not involved in lending and taking deposits, but helps commercial banks clean up their balance sheets and resolve bad loans. The takeover of bad loans is normally below the book value of the loan and the bad bank tries to recover as much as possible subsequently.

The former RBI Governor Raghuram Rajan had opposed the idea of setting up a bad bank in which banks hold a majority stake. “I just saw this (bad bank idea) as shifting loans from one government pocket (the public sector banks) to another (the bad bank) and did not see how it would improve matters. Indeed, if the bad bank were in the public sector, the reluctance to act would merely be shifted to the bad bank.

US-based Mellon Bank created the first bad bank in 1988, after which the concept has been implemented in other countries including Sweden, Finland, France and Germany. However, resolution agencies or ARCs set up as banks, which originate or guarantee lending, have ended up turning into reckless lenders in some countries.

The idea gained currency during Rajan’s tenure as RBI Governor. The RBI had then initiated an asset quality review (AQR) of banks and found that several banks had suppressed or hidden bad loans to show a healthy balance sheet. However, the idea remained on paper amid lack of consensus on the efficacy of such an institution. ARCs have not made any impact in resolving bad loans due to many procedural issues.

Now, with the pandemic hitting the banking sector, the RBI fears a spike in bad loans in the wake of a six-month moratorium it has announced to tackle the economic slowdown.

Bad Bank & the Issue of NPA

Despite a series of measures by the RBI for better recognition and provisioning against NPAs, as well as massive doses of capitalisation of public sector banks by the government, the problem of NPAs continues in the banking sector, especially among the weaker banks.

As the Covid-related stress pans out in the coming months, proponents of the concept feel that a professionally-run bad bank, funded by the private lenders and supported the government, can be an effective mechanism to deal with NPAs. The bad bank concept is in some ways similar to an ARC but is funded by the government initially, with banks and other investors co-investing in due course.

The presence of the government is seen as a means to speed up the clean-up process. Many other countries had set up institutional mechanisms such as the Troubled Asset Relief Programme (TARP) in the US to deal with a problem of stress in the financial system.

The Economic Survey 2016-17 had suggested setting up of a centralised Public Sector Asset Rehabilitation Agency (PARA) to take charge of the largest, most difficult cases, and make politically tough decisions to reduce debt. But no steps have been initiated so far to set up PARA.

Later, in 2018, the Sunil Mehta committee had recommended an Asset Management Company-led resolution approach for loans over ₹500 crore. This proposal too, has remained only on paper.

The need to set up a bad bank assumes importance in the context of macro stress tests for credit risks conducted by RBI showing that the gross non-performing asset (GNPA) ratio of Scheduled Commercial Banks (SCBs) may increase from 7.5 per cent in September 2020 to 13.5 per cent by September 2021 under the baseline scenario.

If the macro economic environment deteriorates, the ratio may escalate to 14.8 per cent under the severe stress scenario. These projections are indicative of the possible economic impairment latent in banks’ portfolios, according to RBI’s latest Financial Stability Report (FSR).

Question for Mains : Describe some common causes of a banking crisis. How the Bad Bank is useful to resolve Banking crises ? Critically Examine