The Delhi government recently announced its decision to use Pusa Decomposer tablets (made with seven types of fungi) on 700 acres of farmland. Punjab is looking at using our capsules on 200 hectares and UP at 10,000 hectares of farm land. Agency has been working on these capsules for the past five years. 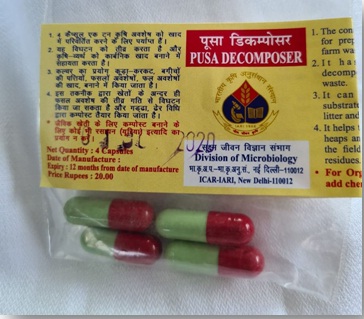 It had work with different strains of fungi, figure out the combinations that work the best and how to optimize them in each capsule. In addition to decomposition, they also release the trapped nutrients in the straw into the soil and thus enrich it for the next crop.

The burning of paddy stubble left in the fields after harvest has been a cause of concern for the past several years as it contributes to air pollution in the northern Gangetic plains and its already polluted cities like Delhi.

Burning of agricultural waste, particularly the stubble left after harvesting wheat, in Punjab, Haryana and Delhi leading to environmental hazards, such as smoke and particle-rich air, making the air we breathe extremely poisonous.

As the spring season starts, like now, people in the area are hit with ‘smog’, or smoke and fog, making the air un-breathable. The Air Quality Index or AQI rises to severe levels (400 or more in Delhi and its neighbourhood).

Incidentally, AQI is estimated based on the amount of particle pollution in the air and the associated generation of ozone, NO2, SO2 , CO. Breathing all of these is bad for health. AQI is good when it is lower than 50 units (as in Mysuru, Kochi, Kozhikode and Shillong), moderate when it is 51–100, unhealthy between 151–200,(as in Hyderabad these days), very unhealthy between 201–300, hazardous between 301–400 and severe above 400 (as in today’s Delhi region, where stubble burning continues).

Several solutions have been proposed over the years to tackle the issue. The most recent one, which has been billed as a game-changer, is the ‘Pusa Decomposer’ capsule developed by IARI.

It is essentially a fungi-based liquid solution that can soften hard stubble to the extent that it can be easily mixed with soil in the field to act as compost.

This would then rule out the need to burn the stubble, and also help in retaining the essential microbes and nutrients in soil that are otherwise damaged when the residue is burned.

Method to Use Decomposer

There are seven strains of fungi that IARI has identified after research which help in rapid breakdown of hard stubble.

These seven strains of fungi are packed into four capsules, which cost about Rs 20 per pack of four. But there is a process for developing the liquid solution from these capsules which can take about four to five days.

It starts with boiling 25 litres of water mixed with 150 grams of jaggery, which scientists say has properties that help in multiplication of fungi.

After this mix has cooled, 50 grams of besan (or gram flour) is added to it along with four ‘Pusa Decomposer’ capsules.

This solution is then covered with a thin piece of cloth and left in a dark room for four days. On the fourth day, a thick growth of fungi will be seen on top of the solution. This has to be mixed well, and thereafter the solution is ready for use.

Pusa Decomposer uses eight or so fungi in order to quicken the decomposition of the stubble. An earlier report by da Costa and others in the journal Applied and Environmental Microbiology, March 2018, titled ‘Enzyme activities at different stages of biomass decomposition in three species of fungus-growing termites’, points out that termites are used in order to generate the necessary fungi to decompose the stubble.

Termites themselves attack crop produce in India, causing havoc in an indiscriminate manner. It was with this logic that IARI seems to have come up with its Pusa Decomposer formula.

Incidentally, it is interesting to note that food grains produced using the Pusa Decomposer qualify as organic farming, since it involves no growth hormones, antibiotics, no genetically modified organisms, and no leaching of surface water or ground water.

The Punjab government has resolved to make the state a zero stubble-burning zone. To this end, it offers a 50% subsidy on machines for individual farmers and 80% for cooperative societies and farmers’ groups. Last year, the governments of Punjab and Haryana also announced a bonus of Rs 2,500 per acre for small and marginal farmers.

If the bonus is given directly to farmers, it could compensate the expenses incurred by avoiding stubble-burning. However, some farmers have said that most farmers don’t receive the bonus of Rs 2,500 per acre.

Last year, the Supreme Court asked the Punjab and Haryana governments to provide Rs 100 per quintal to small farmers to manage the stubble, given that the average productivity is 25.6 quintal per acre in Punjab, they may receive about Rs 2,560 per acre.

But reports highlighted that many farmers didn't receive the amount, even though the government has assigned 8,000 nodal officers to oversee the compensation exercise, to prevent stubble-burning, and to increase awareness of alternate technologies.

There are multiple alternatives to stubble burning, and farmers can choose between the technologies and machines most suited to their particular local conditions, with the objective of ‘no burning’.

The government should play the part of an enabler by spreading awareness about the pros and cons of each option, so as to eliminate confusion and ease the adoption of new technologies by removing socio-economic barriers.

For this, the state governments can rope in block-level agricultural officers and officials of agricultural produce market committees to develop and implement comprehensive ‘no burning’ strategies at the local level.

Which of the following statements is/ are correct ?

Question for Mains : Government should either increase monetary incentives or offer technologies and policies that don’t require farmers to spend even more. It seems that imposing penalties only makes the agri-problems harder to solve. Discuss this statement in the context of India.