Context : Government has extended suspension of fresh proceedings under insolvency law for next 3 months. 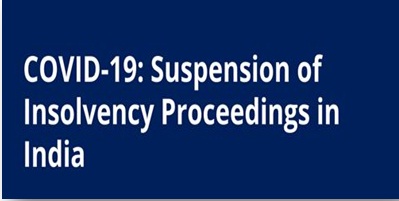 Background : The Ministry of Corporate Affairs has issued a notification to extend the suspension of insolvency proceedings by another three months with effect from December 25 till March 25, 2021. The new notification comes ahead of the end of the present suspension period which is set to end on this 25 December.

In June, the Centre had suspended IBC proceedings for a period of six months with effect from March 25 taking note of the difficulties created by the COVID19 pandemic and the lockdown. An ordinance was promulgated to incorporate Section 10A to the Insolvency and Bankruptcy Code to effectively suspend the operation of Sections 7, 9 & 10 of IBC with respect to default arising on or after March 25 for a period of 6 months, extendable up to maximum of one year from such date as may be notified.

Later, in September, the suspension period was extended for three months up to December 25. The Ordinance was replaced by the Insolvency and Bankruptcy (Second Amendment) Act 2020 passed by the Parliament in September 2020.

Favour to the Companies

The suspension of IBC initiation is expected to save several companies from being pushed into insolvency or being liquidated. Companies which were otherwise viable but got into trouble (became unviable) because of Covid-19 and the resultant lockdown will now be protected. These companies are expected to revert to good health when the pandemic is contained.

By analysing the current situation of the market, from low level to higher ones, it is very much clear that this is the last such window of respite, even as the necessity for a blanket suspension of IBC at this point in time is not as apparent as it was in the first or second quarter of 2020-21.

Stretching the IBC’s in abeyance, for one, does not square up with the government’s proclamations of a firm, V-shaped economic recovery. Finance Ministry officials have repeatedly talked up growth prospects by flagging indicators returning to pre-COVID-19 levels, in several sectors. Surely, businesses in those sectors need no longer be sheltered from exits if they are not competitive.

All suspension could burden banks further and does not appear to have enthused industry either. One reason could be that the suspension also cuts off businesses’ ability to voluntarily enter insolvency, for many, post-COVID-19 operations may not seem viable.

Denying them an exit route so as to cut their losses, while their assets shed value is a lose-lose proposition for both borrower and lender. A more nuanced approach would have been better for banks, businesses and the economy.

Delaying the inevitable would mean greater financial stress ahead, as the restructuring and recovery of bad loans shall get tardier and future growth momentum would be punctured at the cost of understating present systemic stress.

Even though the lenders can approach other forums for recovery of debt, those proceedings are time consuming and not as effective as the resolution process envisaged under the IBC. The suspension is also likely to impact smaller operational creditors as their chance of settling the bona fide claims with companies owing huge debt to them is affected, too.

While the suspension may have been extended looking at the larger interest and to curb the misuse of IBC by lenders, it is bound to severely prejudice the entire banking and lending system.

A general prohibition to initiate proceedings under the insolvency law may have been required in the initial months of the pandemic. However, as more than nine months have passed, corporate debtors in distress should be allowed to use the IBC process to restructure businesses.

Instead of extending the suspension a calibrated progress may have been a worthwhile option. A significant number of borrowers are still struggling with restructuring of loans and the distress assets market needs some more filip.

If there are signs of economic recovery as per the government's assertion, then some sort of opening up would have been a step in the right direction as some beginning has to be made.

An Analyst said that the further suspension of IBC proceedings may have provided a safe haven to many borrowers during this time of economic distress but would surely push back quick resolution of stressed loans for lenders.

The cut-off date of March 25 for filing insolvency application also came as a relief for the lenders who had filed applications or intended to do so against stressed firms that had defaulted before the pandemic started to spread, in sync with the central bank’s June 7, 2019, circular. According to this circular, a default case will have to be referred to the National Company Law Tribunal under the IBC if no other resolution plan is firmed up within six months.

The idea behind the suspension is to help thousands of cash-strapped firms tide over the impact of the pandemic without the fears of getting dragged to the NCLT.

The government, by now, should know which sectors continue to remain in trouble. And if it is concerned about small and medium businesses, it could tweak the default threshold limit a tad higher, while letting bankruptcy processes function again for larger loan accounts.

Question for Prelims : Consider the following statements regarding the National Company Law Tribunal :

1. It is a quasi-judicial body.
2. It is regulated by the SARFAESI Act.

Question for Mains : What is the role of the National Company Law Tribunal ? How is it different from Debt Recovery Tribunal ?