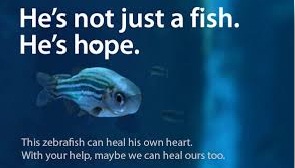 Background: Scientists have found that Zebrafish which is a tiny fish and found in the freshwater ecosystem is able to regenerate its damaged heart in a very short period of time. Prevalent in the South Asian region, the fish is sold in the aquariums and also known by its trade name Danio.

Scientists at the Pune based Agharkar Research Institute have in a study identified the genes found in the fish that helps it to regenerate the damaged part of its heart.

The species is a tiny one about 2-3 cm long and is found in abundance in tropical and subtropical regions of the planet. The fish is also considered to be an indigenous species to the Indo-Gangetic plains of India, where they are found in large numbers in the water filled paddy fields along with streams and stagnant water bodies.

The fish has a very short lifespan of about 2-3 years in laboratory conditions and it becomes adult within weeks after it is born. What makes the fish an attractive proposition for the scientific community is its transparent body through which one can easily spot various body organs of the fish including heart and blood circulation.

Heart diseases and blood circulation diseases are the cause for the death of the largest number of people globally. Humans do not have the ability to regenerate their damaged heart organ unlike their liver or skin.

In mammals, including humans, the heart muscle has a very limited capacity to recover after injury. After an acute myocardial infarction, millions of cardiac muscle cells, named cardiomyocytes, die, and are replaced by a scar.

Unlike mammals, other vertebrates (Having spinal cord surrounded by cartilage or bone) can recover much better from a cardiac damage. This is the case of some fish, including the zebrafish, a well-established animal model in biomedical research which shares with humans most of its genes.

Zebrafish are extremely well suited to study organ regeneration. After heart injury, zebrafish cardiomyocytes can divide and the scar is replaced by new cardiac muscle. The group of Scientist from Puna, has been interested in understanding the cellular mechanisms of heart regeneration during the last 10 years.

Now the researchers show that not all cardiomyocytes in the zebrafish heart contribute equally to regenerate the lost muscle, but that there is a specific subset of cardiomyocytes with enhanced regenerative capacity.

Ccn2a promotes the innate regenerative response of the adult zebrafish heart and maybe a promising therapeutic target for humans. The identified gene, which can promote heart regeneration, can enhance the proliferation of functional contractile heart cells called cardio-myocytes.

It is also observed that this gene resolves the transient collagenous fibrotic scar resulting in faster regeneration. Although, the investigation on the molecular pathways responsible for faster heart regeneration is still ongoing.

Cardiovascular diseases are the number 1 cause of deaths globally, taking an estimated 17.9 million lives each year, according to the World Health Organisation.

While on the other hand, this unique fish has the full potential to regenerate its heart and restore its function after injury.

Till now, there is no treatment available to restore the damaged heart function in humans. Hence scientists have sought to decode the heart regeneration processes using this model animal, which can naturally regenerate their hearts efficiently so as to understand the processes which can illuminate strategies to improve human cardiac regeneration.

The breakthrough in finding the gene in the Zebrafish will help understand scientists to understand the mechanism of heart regeneration and look at the possibilities of making it possible for humans.

Question for Prelims : Which of the following statements is/are correct regarding the Zebrafish, seen recently in the news:

1. It is a fresh water fish.
2. It can regenerate its damaged heart.
3. It is found only in South-east Asia

Select the correct answer using the code given below:

Question for Mains : According to the World Health Organisation report, Cardiovascular diseases are the number 1 cause of deaths globally, In the light of the above fact, Research on zebrafish has put some hope for future heart related diseases. Describe briefly its importance and what advantages it has ?