Context : Hope of economic recovery after the break in economic activity due to Covid pandemic. 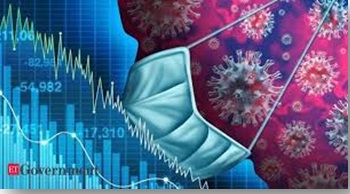 Background : Even as industrial output picked up as the economy reopened, buoyed by pent-up demand and a festival spending boost, consumer sentiment remains weak. The employment outlook is tepid and household incomes continue to be sub-optimal. Stimulus-fuelled investment flows from the US and Europe have brought back risk appetite, sending a deluge from safe-haven assets into stock markets and emerging market economies.
India is a net gainer in fact, if the financial market optimism were to be conflated with the travails of the real economy.

In a little over a month, Finance Minister, will present what she has heralded as “a Budget like never before”. As a year like never before ends, there are questions on the way forward, including whether the Budget, or any policy intervention by the government in the coming months, can make up for the underwhelming fiscal stimulus response to the situation brought about by the pandemic. And whether other headwinds might potentially circumscribe the rebound in economic growth.

The Finance Minister said recently that “investment in research and development in medicine, biotechnology, and pharmaceuticals are the need of the hour”. North Block seems to be readying an infrastructure push, backed by some of the powder that it has kept dry. A production-linked incentive scheme for pushing “self-reliance” is being billed as a template for a manufacturing push. But there are hurdles.

Industry is watching the resolution efforts at Wistron’s iPhone manufacturing facility in Karnataka, where violence broke out at a time when the limited success in the smartphone assembly sector is sought to be replicated in pharma and automobiles and when there is continuing labour unrest at Toyota Kirloskar Motors’ plant outside Bengaluru.

Investors are also watching the government’s reactions on the legal setbacks in the Cairn and Vodafone retrospective taxation cases. India has chosen to challenge the Vodafone verdict, and a challenge is expected in the Cairn case as well.

There are worries about the financial sector. Since April, with the moratoriums kicking in, the recognition of defaults has been pushed down the road. It’s a double whammy for the sector loans have turned bad, even if they’re not being recognised as NPAs, but the lender is not getting the interest in cases where firms have folded up. When EMIs stop, banks’ interest income is hit, and its net interest margin comes down. The profitability of the financial sector is getting squeezed, and without massive recapitalization, the sector could end up being a drag on the economy going forward.

According to the IMF, the economy is likely to contract by 10.3 per cent in the current fiscal, and then grow by 8.8 per cent in 2021-22. But while real GDP is expected to rebound, it may take almost two years for it to get back to pre-pandemic levels. According to estimates by the Head of Emerging Markets at J P Morgan, Jahangir Aziz, at the end of fiscal 2021-22, the economy could be 10 per cent lower than the pre-pandemic growth path.
There is a more fundamental issue relating to the timing of a fiscal stimulus. 2020-21 was the pandemic year, and if India had run up a large fiscal deficit on account of a stimulus, it would have been in line with every other major economy — and rating agencies would not have downgraded India on the size of the spending. According to Pronab Sen, former Chief Statistician of India, any backloading of stimulus spending that stretches into the following year or beyond, would run the risk of India being seen as an outlier.All eyes on the Budget for now.

1. In external sector demand conditions remained weak.
2. The demand can be gauge by the decline in exports and imports.

Select the correct answer using the codes given below:

Mains Question : Inflation has been a bugbear for policy makers in India. Elaborate.