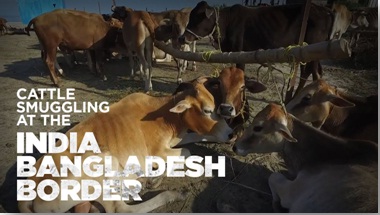 Background: The CBI is conducting searches at two premises of many areas in Kolkata among other locations. The agency had arrested an alleged kingpin of the cattle smuggling racket in West Bengal and two BSF officials in connection with the case. The CBI had done a preliminary enquiry which showed that cattle smuggling was rampant along the India-Bangladesh border which is allegedly aided by some corrupt officers of the BSF and Customs receiving illegal gratification from smugglers.

The Agency has filed the FIR on September 21 against six persons who are named, and others. Among those named one was the Commandant of BSF’s 36 Battalion in Malda from December 19, 2015 to April 22, 2017, besides alleged smugglers. They have been charged under Section 120B of IPC (criminal conspiracy) and Sections 7, 11 & 12 of the Prevention of Corruption Act, 1988.

The FIR alleges that during BSF officer's posting, the BSF seized more than 20,000 heads of cattle before they could be transported across the border, but vehicles carrying these animals were not seized and persons involved were not apprehended. So far, Satish Kumar and the alleged kingpin Enamul Haque have been arrested. At least six Bengal Police officials have been summoned and two have been questioned for any light they may be able to throw on the racket, CBI sources said, while a few businessmen said to be linked with influential people are under the CBI scanner.

There are tens of thousands of cattle are estimated to be smuggled from West Bengal to Bangladesh through the 2,216-km border in the state, every year.

Each cattle head is priced at Rs 80,000-90,000 (breeds from UP and Haryana) or Rs 40,000-50,000 (smaller breeds from Bengal) in Bangladesh. Prices shoot up during Eid , when there is high demand for packaged meat exported by Bangladesh. At such times, cattle fetch twice the prices at which they are procured in India.

According to CBI sources, after the cattle were seized, these were shown as smaller than their actual size in the BSF seizure memo. This reduced their value at auctions that the BSF and Customs conduct for seized cattle. CBI officials alleged that only selected traders, with an alleged nexus with BSF and Customs officials, would be allowed to buy the cattle at such low prices at the auctions. Once bought, the cattle would be smuggled into Bangladesh by the same traders.

The investigation has come ahead of Assembly polls this year. In its preliminary enquiry, the CBI has spoken of some BSF and Customs officers being bribed by smugglers. Now, the CBI is probing a larger conspiracy possibly involving political leaders.

The opposition parties has moved on from the Saradha and Narada cases to the cow smuggling crackdown, as well as illegal coal mining.

In the run-up to the 2013 rural polls, and the 2014 Lok Sabha and 2016 Assembly elections, CBI and Enforcement Directorate investigations into several ponzi schemes had resulted in the arrest of a number of Trinamool Congress leaders and the interrogation of several others. Ahead of the Assembly elections, the state will be watching if any ruling party leaders are called for interrogation in the cattle smuggling case.

The CBI had done a preliminary enquiry which showed that cattle smuggling was rampant along the India-Bangladesh border which is allegedly aided by some corrupt officers of the BSF and Customs receiving illegal gratification from smugglers. Cattle smuggling is quite rampant along the India - Bangladesh border and takes place primarily through some of the border districts of West Bengal, Assam and so on.

Question for Prelims : Which Article of the constitution contains the provision for the prohibition of cattle slaughter ?

Question for Mains : Discuss the role of livestock in the Indian economy.