Context: Completion of the long standing pipeline project and the protest. 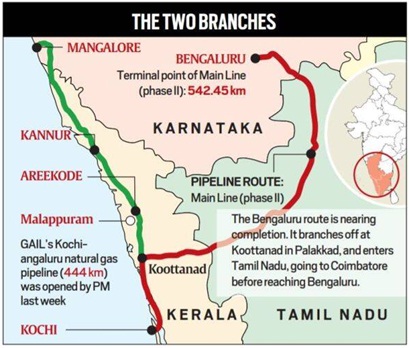 Background: Prime Minister on 5th Jan dedicated the 450 km long Kochi-Mangaluru natural gas pipeline to the country. The key infrastructure project has come about after overcoming protests in Kerala, misconceptions about safety, and a long delay. It will supply natural gas to commercial and industrial units across the districts along the pipeline, including the consumption of cleaner fuel will help in improving air quality by curbing air pollution.

It has transportation capacity of 12 million metric standard cubic metres per day and will carry natural gas from the liquefied natural gas (LNG) regasification terminal in Kochi to Mangaluru, passing through Ernakulam, Thrissur, Palakkad, Malappuram, Kozhikode, Kannur and Kasaragod districts.

The newly built pipeline has a transportation capacity of 12 million metric standard cubic metres per day. It will carry natural gas from the liquefied natural gas regasification terminal in Kochi all the way to Mangaluru. The pipeline will pass through Ernakulam, Thrissur, Palakkad, Malappuram, Kozhikode, Kannur and Kasaragod districts, the PMO had noted in a statement. The 450 km long pipeline has been constructed by Gail (India) Limited.

The total cost of the project was around Rs 3,000 crore. The construction of the pipeline created over 12 lakh man-days of employment, reports PTI.

The pipeline is expected to supply environment-friendly, affordable Piped Natural Gas (PNG) to households. It will provide Compressed Natural Gas (CNG) to the transportation sector. The pipeline will also supply natural gas to industrial and commercial plants in the districts which are situated along the line.

It was conceived in 2007, envisages pipelines from Kochi to Mangaluru and then to Bengaluru. In the first phase, a 44-km line was laid in Kochi, linking the terminal with local industrial users, including Bharat Petroleum Corporation Limited. To take natural gas to domestic consumers, Indian Oil Corporation (IOC) entered into a pact with Adani Gas Ltd.

The project got single-window clearance, In 2009, which should have been completed in 2013. However, protests took place as local people wanted the alignment along a sea route rather than through inhabited areas.The locals felt that the pipeline was a ticking gas bomb.

Even several political groups, despite having full knowladge, chose to stand with the protesters. When even local leaders of the ruling party joined the agitation, the government suspended the survey. GAIL too suspended all contracts. The government even pulled up then Chief Secretary for his determination for the completion of the project.

After the change of local Government in 2016, the project took some pace. The Chief Minister placed the GAIL pipeline in his 100-days projects. The local leaders stepped back from their protest. The Central Government too wanted Kerala to give top priority to the project as the LNG terminal in Kochi was incurring huge losses.

The government convenced the landowners by increased the compensation amount for the acquired land, and reduced the width of the land to be acquired was reduced. After laying the pipeline, farmers were allowed to cultivate, except deep-rooted crops. Although some religious groups were still led protests in many places, and the protests turned violent in Kozhikode district in 2017, the government ensured that work proceeded under police protection.

Question for Prelims : Consider the following statements regarding the Compressed Natural Gas :

1. The primary component in it is methane.
2. It is highly flammable as it is much heavier than air.